A family are facing eviction this Tuesday morning in Camberwell. This is the second time Southwark council are trying to throw the family on the street and have caused enormous stress for them. We stopped the bailiffs the first time and we can do it again – with your help and support! With enough people standing in the way we can stop the eviction.

But resisting the eviction isn’t enough. Southwark council must drop their claim that the family is ‘intentionally homeless’ – which is their excuse for evicting the family and getting rid of the legal duty they have to house them. We know that no one is intentionally homeless and we must make Southwark see that too! In this case it looks like the council have dragged up events from 2012 in desperation to prevent the family from accessing the help Southwark should be providing.

This family has been in temporary accommodation for years, Southwark should be providing them with stable, secure, council housing – not pushing them into further homelessness.

Bring yourself, your friends, neighbours – we’ll bring the breakfast! If you can’t make it on the day, please support us online on the day by retweeting and tweeting Southwark council to keep the family housed.

As we said, the eviction resistance will be the first action – there will be more until the family are guaranteed their homelessness duty with the intentionally homeless threat removed. Please join us!

URGENT UPDATE: This resistance has been called off as the Possession Order has been withdrawn – for now. Please keep an eye out for updates on this ongoing situation.

We’re currently seeking legal support to try and stop the eviction of a pregnant mum and her young daughter by Southwark Council, but if this doesn’t work, we’ll be resisting the eviction this Friday morning – meeting together at 10:30am at Dean’s Buildings, SE17 1RE (at the end of the road where Dean’s Buildings meets Orb Street) 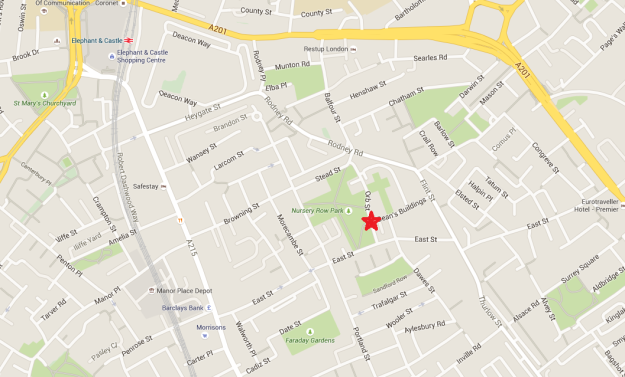 Check back on Thursday afternoon to see whether or not we’ll need to resist the bailiffs on Friday. We’ll also be sending a call out via text message on our eviction resistance phone tree –which you can  join here – and keeping people updated on our website and social media.

For some time, we’ve been campaigning against the culture of abuse at Southwark Council’s Housing Office in Peckham. HASL – Starting from yesterday – will be outside the office every day this week between 11am and 2pm handing out leaflets, talking to, and supporting people who have to experience the housing office’s sustained bullying, intimidation and gatekeeping. We hope to demonstrate that the abuse is not isolated to a few individuals, but endemic to the everyday running of the office. If Monday’s session was anything to go by, this seems to be the case.

Within 5 minutes setting up the stall on Monday, the security manager and another security officer (M) approached us and began quoting made-up laws about draping our banner on the railings. They began to verbally abuse us and M made direct threats to a member of the group (M also appears in this video where we were denied entry to the building when attempting to support someone who requested it.) When we realised they were simply trying to distract us we ignored them and they gave up. By the end of the session, the offices were unguarded, save for a few housing officers coming out to look at us and the odd gratuitously hurtful comments made by the security manager as he criticised the parenting of a woman who was talking with HASL (people have also reported experiences of victim-blaming by the council, women in particular are often unfairly criticised about their parenting skills because they are in poverty).

We met a lot of people. Every single one of them had a horror story to tell, and were being entirely inadequately served by the council. As we’re habitually denied access to the offices at the moment – in direct contradiction to written assurances from Southwark’s cabinet member for housing, Richard Livingstone – we tried to offer support and advice to people from outside. Here’s are just some of of the stories we heard from the people we met:

Many people who turn up are simply turned away without reason or told things that simply act to delay them getting the help and support they need. People are told to come back at arbitrary points in the future, without appointments. Appointments that are offered regularly result in unexplained non-attendance from council officers. People are told very little information, and find it very difficult to know how their cases are progressing, adding stress to an already hugely stressful situation. Gatekeeping practices, which Southwark has been called out on by the courts, are business as usual at the housing office. Based on our conversations with many people today, not a single person we met had been dealt with according to the Code of Guidance or the relevant legislation. It appears that this is a housing office utterly out of control.

We handed out lots of leaflets, were able to talk to lots of people about what should be happening if Southwark Council were to operate even nominally within their own publicly stated practices. People were grateful to have the opportunity talk and share in each others struggles. We talked about the experiences HASL has had as a group – all of which was really warmly received. We can fight this treatment, if we do it together. People are quite rightly furious at the way they are treated, and we talked about ways we could work together to seek some kind of justice. The stall also offered a chance for newer faces to the group to become more comfortable talking to people, and we were able to share the knowledge we’ve picked up together.

If you can spare even an hour this week to offer support to these stalls, please do drop by any day from now until Friday, from 11am-2pm. Peckham Housing Office, 25 Bournemouth Road, London, SE15 4UJ. We’ll also be talking about the events of the week at our lunch club picnic on Saturday.

UPDATE: We will be meeting tomorrow – Thursday 16th – at 10am on the south end of London Bridge by the staircase with the big spike, next to Evans cycles. If you are Brixton based, we will be meeting outside Brixton tube at 9am to head up together. Join us there to show your support for our HASL member and her family and demand housing NOW.

One of our members has faced appalling treatment by Southwark council which saw herself and her family made homeless. We have got legal support from a community law centre and are in the process of appealing the decision that made them homeless and have requested temporary accommodation from the council whilst the appeal takes place. However a week on, Southwark council have failed to provide the desperately needed temporary accommodation for the family. Join us on Thursday 16th October, meeting at 10am on the south end of London Bridge next to the staircase with the big spike and near to Evans Cycles to demand temporary accommodation now. For Brixton based people, meet at 9am outside Brixton tube station to travel together.

Southwark council have shown extreme disrespect for our member and their process has caused immense harm and distress to the family who do not have a safe and secure place to stay due to the council’s negligence. Join us there to show your support. Check our blog, facebook and twitter for updates.

Ellen is due a refund of the bedroom tax that she has been forced to pay for a year now, as she meets the criteria for the bedroom tax loophole. However, the housing office have not been all that helpful in getting this refund back to her.

The housing office have taken over a month to respond to our appeal letter and we only received the unfavourable response after chasing them up about this. The response gave very little detail or evidence of why this negative decision had been made.

The bedroom tax (one of many brutal welfare and housing cuts) is causing great hardship to the hundreds of thousands of people it is affecting. The refund offers a tiny respite from this stress and suffering by returning a small sum of money that should never have been taken off of them in the first place. It takes little effort from the council and will make a huge different to the people who receive it.