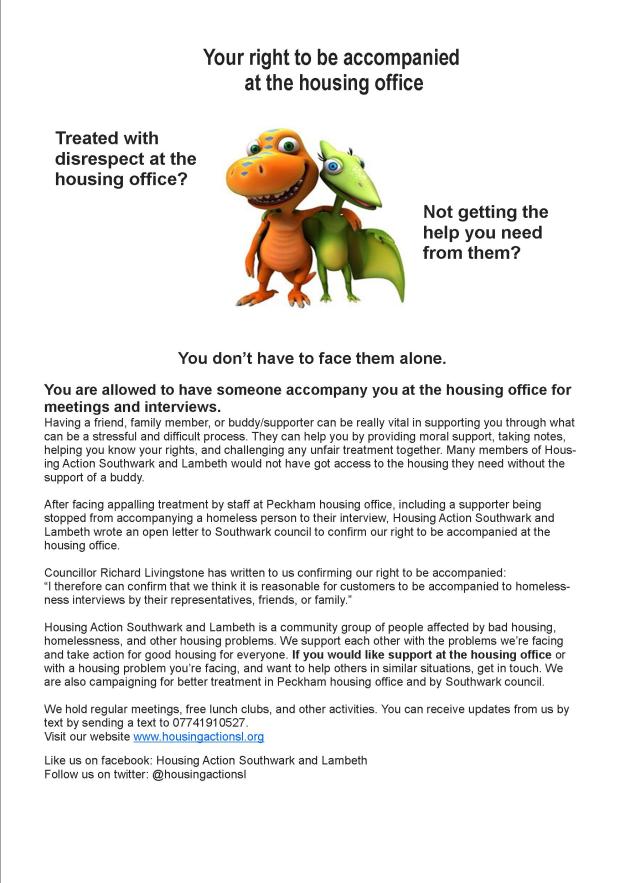 Housing Action Southwark and Lambeth have received confirmation from Southwark council that people visiting the housing office can have someone to accompany them for all meetings and interviews.  The group had written an open letter to Southwark council in March about people’s right to be accompanied at the housing office after members  of HASL experienced disrespect from staff, been unlawfully denied a homelessness assessment, and had been refused a supporter  to accompany them to a homelessness interview.

In response to HASL’s letter, where they raised their concerns about the treatment of homeless people in Peckham housing office, Councillor Richard Livingstone confirmed: “I therefore can confirm that we think it is reasonable for customers to be accompanied to homelessness interviews by their representatives, friends, or family.” HASL considers this as a small victory in their campaign against gatekeeping and the culture of disrespect at Peckham housing office.

Liz Wyatt, a member of HASL said: “Our members have faced appalling treatment by staff at Peckham housing office and we are deeply concerned about the culture of disrespect, intimidation, misinformation and gatekeeping that homeless people trying to access the help they need are subjected to.  Our members have been wrongly sent away without being given a homelessness assessment and they have been refused a supporter with them at a homeless interview.

“Now that we have it in writing that we have the right to have a supporter with us at the housing office, we hope that this will be respected. From our experience, having someone with you at the housing office is vital for moral support in these stressful and difficult times, helping you to know your rights, and making sure you get access to the help you need and deserve. We want people to know that you don’t have to struggle alone.”

Housing Action Southwark and Lambeth have made a new leaflet informing people of their right to be accompanied at the housing office and about getting involved in the group where they can find a buddy to accompany them to the housing office. They will be launching this leaflet this Friday with an information stall outside Peckham housing office on Bournemouth road from 12pm.