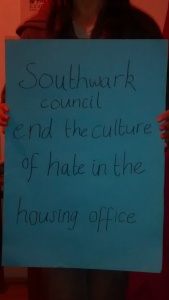 – “Homeless? We will check, check and check again” Poster in Southwark Housing Office

The following testimony highlights 4 types of gatekeeping tactics, employed by Southwark council against homeless people, that are additional to those raised recently in the High Court after a legal challenge by Hansen Palomares: 1) Delay and time wasting, 2) Initial allocation of temporary housing for two days, 3) Isolation, 4) Verbal intimidation and abuse. Our first request of Southwark Council is for senior housing officers and councillors to reaffirm that gatekeeping practice 3) isolation of the homeless person by refusing them an advocate is against their policy and best practice.

Housing Action Southwark and Lambeth members have had extremely bad experiences of visiting Southwark council’s housing office in Peckham. We blogged here about staff physically and verbally abusing our members who were trying to access housing that the council must provide. Another member reported being racially abused by a staff member. Most recently we were contacted by A who had visited the housing office ten times presenting herself as homeless and asking for the support that they have a legal duty to give her and her family. At all of these visits she was turned away by the staff. There is also the well publicized case of Southwark housing officials conspiring to make a man homeless.

We are organizing together to challenge the culture of disrespect and abuse that often vulnerable people are subjected to at Peckham housing office. As well as providing practical support , including accompanying each other to visits to the housing office, we have been speaking with people outside the housing office about their experiences and giving them leaflets about their rights. We have lots more activities planned as part of our campaign, so get in touch with us if you’d like to be involved.

At the same time as we were providing practical support to A in the housing office and challenging the gatekeeping we were confronted with, a legal challenge by Hansen Palomares lawyers won a High Court order that requires Southwark council stop its unlawful practices of turning away homeless applicants without conducting proper investigations into their case (under the Housing Act 1996 local authorities must provide temporary accommodation to anyone who it has reason to believe is homeless or threatened by homelessness, is eligible for assistance, and is in priority need – for more information see the London Coalition Against Poverty leaflet). We hope that this legal victory will bring about change in the housing office. But we also know from first-hand experience that the gatekeeping at Southwark goes far deeper than turning people away from the start. Those who do manage to get a homeless application started at the housing office are subjected to a culture of bullying and intimidation that follows homeless applicants through every level of the process. They are also given misinformation and constantly set up to fail by the staff there. This means that many people who have started a homeless application could be forced to abandon it or told that they have made themselves ‘intentionally homeless’. Our recent experience with A saw us encounter these gatekeeping tactics. Staff consistently acted against the interests of A, doing their best to end the homelessness application whenever they saw an opportunity.

A’s case – How many people does it take to make Southwark council conduct a homelessness application?

A and her family were living in severely overcrowded accommodation which meant that legally they counted as homeless. A made 10 visits to the housing office to get help with her housing situation but each time she was (unlawfully) turned away. She got in touch with us and we were able to help her finally get a homelessness application appointment. Having experienced problems at this housing office before, we organized for other HASL members to go along to the housing office in support of A. In total, it took three full days (in addition to her previous visits) at the housing office, with a number of supporters each time, and a housing lawyer on the other end of the phone providing legal backup to get temporary housing. What should be a really basic process required an enormous amount of labour hours and was shown to have been impossible to navigate alone.

At the initial meeting, we were handed 5 different forms to fill in, some several pages long, to complete. One of these forms was a ‘priority need’ form which included 71 questions – none of them actually establishing whether the person was in priority need, but instead asking about hobbies and whether you’d accept private rented accommodation if they paid the deposit. These questions seem to be tricking the applicant into making themselves seem intentionally homeless – for example, if you said you enjoyed shopping or gardening, they could use this to question the medical issues you raised, or if you stated that you did not want private accommodation, this too could be deemed as making yourself intentionally homeless for failing to look at other options (take a look at the questions and our analysis here). Another sheet of paper had a check list of all the documents that A was told she must provide. Across the top of the sheet it informed us that if we failed to provide all of these within 7 days, her case would be closed. Of course, for many homeless people, these documents could be at friends’ houses, lost, or difficult to obtain in the weeks time frame.

After a morning of form filling, A had an interview in the afternoon. The HASL supporter requested to accompany A to the interview for moral support and also to take notes (especially as English was not A’s first language). The woman who was going to conduct the interview responded to this request by shouting that they would not be allowed into her interview before storming off. We were extremely concerned about A being refused a supporter to the interview with no reason given other than ‘this is my interview’, as well as at the abusive behavior of this staff member.

We return to complete the process and the HASL members there in support are once again threatened, now by the worker who tells us she will call the police on us without any cause. They send A to the other building in which the temporary accommodation will be allocated but in this office they tell us that the other office has not sent the permission through. They take another several hours to do so. By which time completing the allocation is rushed and so a panicked A leaves for work running late. Her husband is forced to collect the kids from school and take them on several busses to meet the landlord. The accommodation however has only been granted for two nights, meaning A is forced to return to the office to extend it.

Accompanying A once more to the office to have her accommodation extended the worker tells me that only two days were granted ‘because if it was any longer A wouldn’t bring back the forms she is required to complete.’ A has been aided in filling out these forms since her English is not fluent. One form includes a personal statement on why she is homeless. The housing worker tells us that she must now complete the forms from scratch in front of her with the aid of a translator because she does not believe A wrote the forms herself. The meeting is not allowed to begin until the HASL members there for support leaves, a manager is called, more threats are made and we are forced to leave A alone to carry out what is effectively yet another homelessness interview lasting three hours. By which time the allocation procedure requires A to call in sick for work, risking her job and so putting her and the family at risk of homelessness.

Making the process take all day was a way of disciplining A via her housing need, causing her three times to chose between completing the process or risk losing her job.

Eventually, A and her family were provided with temporary accommodation –having successfully challenged all the gatekeeping. This was certainly a victory for all involved. This case shows the importance of practical support and solidarity, as well as the dire need for significant change in the culture at the housing office.

You can take a supporter with you to the housing office

There are a whole load of reasons why someone might want to take a friend or supporter with them to meetings and appointments with the council, or any other institution (for example the Job Centre or Work Capability Assessment interviews), particularly when making a homelessness application. These reasons may include help with note taking and simply moral support during what can be a very stressful time. It is your right to have someone to come along with you to any appointment or interview if you would like this. We hope that Southwark council housing staff and Southwark councilors will confirm that this is indeed the case, that they recognize the importance of this right to have someone with us at meetings, and that they will make sure that this policy is implemented in the housing office. We will be contacting them with this blog post about our right to support and requesting that they send us a written response.

HASL members accompany each other to appointments, if you’d like to get involved in this buddy system, please get in contact or come to one of our regular meetings.

As well as having our right to be accompanied respected, we want an end to all other gatekeeping practices and an end to the abuse and disrespect that people are subjected to by staff. We want to see Southwark council acting in the best interest of their homeless residents, making sure that they get much needed local, secure, social housing.  They’ve got a lot work to do to make this a reality as the two recent damning High court judgments and our testimonies show. We will continue to support homeless people visiting the housing office and will work with lawyers to ensure that the recent High Court judgment is followed by Southwark council.