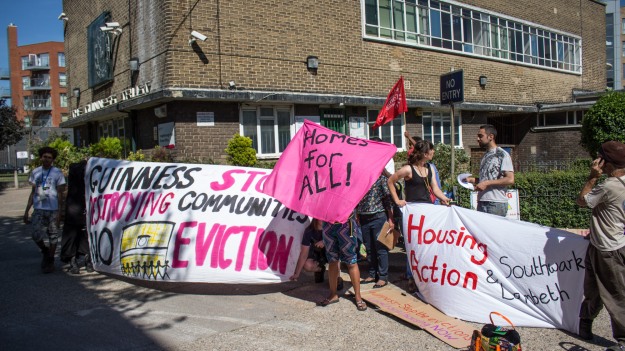 Some photos of billowing banners and a sunny protest here

On Friday, Guinness Trust shorthold tenants held a loud and lively protest on the estate against evictions and demanding local, social housing. Assured Shorthold Tenants (ASTs) are threatened with eviction and homelessness as part of the estate’s ‘regeneration’. More information here including a tweet button to let ‘social’ landlords Guinness Partnership know what you think of their social cleansing plans.

Over thirty people joined the protest which saw the Guinness Partnership close their office on the estate for the afternoon. The residents’ campaign is supported by Housing Action Southwark and Lambeth and Lambeth Housing Activists. A number of secure tenants joined the protest and a group from the House Of Brag queer social centre in the old Joy shop, who have been making links with local Brixton struggles, came down to support. People played drums, chanted, and spoke with residents and passersby about what was happening to the ASTs.

There was a huge amount of support from the people we spoke with, especially other residents on the estate. On hearing that the Guinness Partnership were making his neighbours homelessness one man said: “it’s wrong, it’s wrong”. Another woman who lived on the estate expressed her anger at the Guinness Partnership’s actions and remarked how this was part of the wider gentrification of Brixton. Talking about all the new shops that have been springing up she asked, “who needs soda bread and ham that’s been cured for 28 days?”

Keep your eyes on this blog, facebook and twitter for more actions as part of the campaign calling on the Guinness Partnership to stop the evictions and provide ASTs with local, social housing. Get in touch with us if you’d like to get involved: haslemail@gmail.com

Then, on Saturday we joined the Focus E15 mums’ campaign and people from other housing groups across London for the ‘March for Decent Housing’ through Newham. Like the ASTs on the Guinness Trust estate, Focus E15 mums are demanding local, social housing after Newham council tried to move the mums out of London into private accommodation in Manchester and Hastings. The campaign saw them win a partial victory as they have been housed in their home borough of Newham, however, the Focus E15 mums are calling for local, secure and affordable social housing for their families and for everyone.